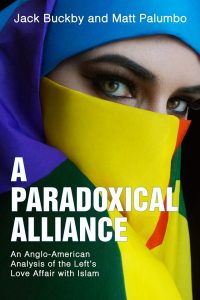 The Left’s bizarre alliance with Islam is nothing short of paradoxical. No other belief system that directly conflicts with Western and liberal values gets the same defence from those purporting to hold such values. In “A Paradoxical Alliance,” British activist Jack Buckby examines the phenomenon in the United Kingdom, while American journalist Matt Palumbo does the same on the other side of the Atlantic.